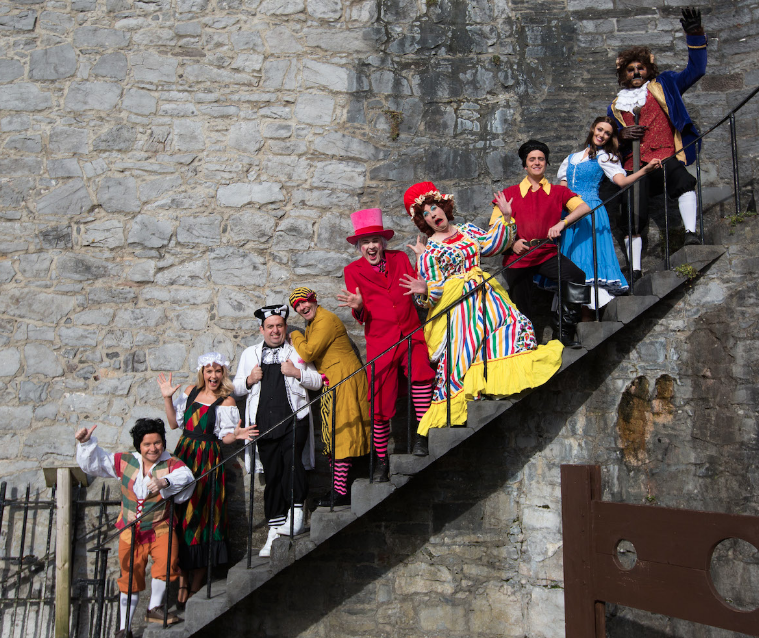 The Spar Panto Beauty and the Beast cast in full costume for the launch of the show in King John’s Castle. Picture: Sean Curtin / True Media.

The star-studded cast of the SPAR Panto Beauty and the Beast, were out in force today to launch this year’s show which runs at University Concert Hall, Limerick from December 19. Set against the stunning backdrop of King John’s Castle in Limerick’s Mediaeval Quarter the fairytale cast, in full costume, looked very much at home.

Hailed as “achingly funny” (The Sunday Times) Karl is a regular performer at Kilkenny Cat Laughs, the Galway Comedy Festival and the Edinburgh Fringe Festival. He has performed in Australia, the US and South Africa and has toured with Kevin Bridges and Ed Byrne. Aoibhin Garrihy became well known to Irish audiences as Neasa Dillon on Fair City and Lyndsey Conklin in BBC’s The Fall with Jamie Dornan. She recently appeared on stage at University Concert Hall in the sellout performance of Landmark Production’s Ross O’Carroll-Kelly’s play Breaking Dad. Ex-MMA fighter turned comedian Tom O’Mahony starred alongside the legendary Rik Mayall in RTE’s record-breaking hit comedy Damo & Ivor as the intolerable toff, Tarquin. He has since been a regular on Irish TV shows including Republic of Telly and Irish Pictorial Weekly.

The rest of the much loved UCH Panto gang are also back for what will be a completely hilarious take on this tale that is as old as time! Fair City’s George McMahon will play the selfie-obsessed Gaston, who professes to love the beautiful Bell, played by Leanne Moore, almost (but not quite!) as much as he loves himself! Richie Hayes will make sure the fun factor is high, playing Gaston’s loveable side kick Gascraic.

native Limerick to take on the role of the Beast. John has recently starred as Rudolpho in Matilda the Musical and is currently touring New Zealand in Pricilla. Dame Myles Breen returns for what will be his 20th consecutive year starring in a Panto, with hilarious Ilovelimerick.com founder Richard Lynch becoming Montyesque as he asks Belle to Say Yes to The Dress!

The SPAR Panto, Beauty and the Beast, at University Concert Hall is now on sale with all seven school shows already sold out and limited availability on some performances in the general run.

SPAR, one of Ireland’s largest convenience retail groups, announced its title sponsorship of the 2016 University Concert Hall, Limerick Panto in August of this year. Representatives from all ten of the local stores involved were on hand to celebrate today’s launch. A SPAR “Hut”, set up in the courtyard of King John’s, provided the perfect pit stop for Gaston and Co. to refuel on their way to free Belle from “the Beast’s” imposing Castle.

Speaking at the launch, Colin Donnelly, SPAR Sales Director said “SPAR is delighted to be the title sponsor of the 2016 University Concert Hall, Limerick Panto. SPAR stores are at the heart of Irish communities and events such as the UCH panto breathe life into local communities. This year the pantomime is expected to be one of the biggest and best yet. We wish everyone involved the best of luck.”

Director of University Concert Hall, Sinead Hope, welcomed invited guests to King John’s Castle for the launch saying “SPAR are the first title sponsors of our panto and I think it speaks volumes for how far we have come in the past 4 years – to be here, launching our 5th production, and to have one of Ireland’s largest convenience retail groups joining forces with us. From starting as an unknown entity 4 years ago, we have since sold over 80,000 tickets and the Panto at University Concert Hall is now a “Must See” Christmas show and a guaranteed fantastic family day out!”

The Spar Panto Beauty and the Beast will be running from Monday December 19 until Sunday January 8.

Tickets for the Spar Panto Beauty and the Beast will be from €17.50 Matinee and Evening Shows